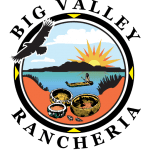 Big Valley tribal members are descendants of the Xa-Ben-Na-Po Band of Pomo Indians that historically have inhabited the Clear Lake area for over 11,800 years.

Konocti Vista Casino and Resort is an enterprise of the Big Valley Band of Pomo Indians of Big Valley Rancheria of California.

Other tribal enterprises include:

For more information about Big Valley Rancheria please visit their website at www.bvrancheria.com

For many generations, the various Pomo Bands enjoyed unfettered use of the lands and waters of Lake County, California.

In 1851, our leaders met with a representative of the President of the United States and all agreed upon a treaty that would allow us to live in peace and harmony with the new settlers coming to the area. This treaty established a reservation with a habitable area of approximately 72 square miles on the South side of Clear Lake which encompassed Mt. Konocti east of Kelsey Creek. The area also included significant water front property just west of an exclusive area known as Buckingham. On July 8, 1852 the United States Senate, in executive session, refused to ratify this and 17 other California Treaties and ordered them filed under an injunction of secrecy which was not removed until January 18, 1905 (53 years later). At the same time Congress passed the Land Claims Act of 1851 which provided that claims to all lands in California be presented within two years of the date of the act. Our leaders were unaware of the need to present their claims and failed to meet the statutory deadline. Deprived of protected legal title to their lands by treaty or formal claim, our ancestors became landless.

Years later the various Pomo Bands around the lake were given small parcels of land called Rancheria’s. Our Rancheria site was initially established as a Catholic Mission in 1877. In 1914 the U.S. Department of Interior purchased the land for our tribe and in 1936, under the Indian Reorganization Act, we were federally recognized. Then in 1963 our Tribe (tribal government??)was illegally terminated under the California Rancheria Act of 1959. The tribe was subsequently re-established by court order as a federally recognized tribal entity in 1983 under Tillie-Hardwick. During that 20-year period approximately half of the original Rancheria land had been re-sold to non-Indians. In 1986 we began the process of reconstituting our rights of self-determination by re-forming our government through the guidance of our 1936 Constitution. We also began the task of buying our land back.

The Big Valley Band of Pomo Indians is a self-governing tribe, which means we have the right to govern our lands in much the same way that the Board of Supervisors governs the lands within the boundaries of Lake County. We have the powers to write and enforce ordinances, regulate commerce, tax, set up a judiciary and police enforcement system and other powers delegated to local governments. Because of our interrupted past, our tribal government is still weak and developing, but our membership is strong and our people are wise. Our government is similar in many ways to that of the local county government. Sometimes we bow to the pressures of a vocal minority but most of the time we stand firm and strong for the majority.

We have much in common with our neighboring non-Indian citizens. We share an ancestry committed to the stewardship of the land, we share the common waters of Clear Lake, we cherish our land and private property rights, and we believe in free enterprise without government interference. In many ways our little Rancheria is a microcosm of Lake County, a self-governed community with all of its strengths and weaknesses magnified by its mere 153-acre size.

In 1994, our Chairman, with the support of tribal members, defied local, federal and state officials by constructing Konocti Vista Casino and, almost overnight, we became one of the larger employers in the County. In 1999 our economic venture contributed over $2.8 million in payroll dollars into the local economy. As in any start up business venture, we have made many mistakes, learned by trial and error and became wiser for them. We are now a member of the Greater Lakeport Chamber of Commerce, a co-sponsor of the local bass tournaments, the Summer Concerts in the Park and other community events. And, like other new capitalist ventures, the local government provided constant resistance to all our efforts.

In 1999 the Big Valley Tribe adopted a Master Land Use Plan and Mission for the future development of the Rancheria. Our Tribal Mission is to provide economic self-sufficiency, improve self-esteem, promote quality future development, provide for and maintain a government for the community, protect the environment and enrich tribal life by preserving, documenting and teaching the Pomo culture for future generations. The local critics labeled this plan our “wet dream.”

In 1999 we also formed a Housing Authority with the mission to provide safe, decent, sanitary and affordable housing, housing opportunities and safe communities that enhance the quality of life for low – and moderate – income tribal members. We know the existing housing site along the county road bordering our Rancheria is not a safe community. The speed limit is 45 mile per hour and there are no barriers or sidewalks to protect our children. Our Master Plan envisions a new walled and gated community being built on our 40 acre parcel of land just SW of these homes, linked to a Community Center on the six acre parcel adjacent to that site. We have just received a $400,000 commitment towards the infrastructure improvements to the housing site and expect to begin that construction in early 2001. Current property owners along this county road will have the opportunity to trade their home and land for a new one. We expect to begin construction of a new community center this summer with $493,000 presently committed to the project and an additional $360,000 USDA loan being processed.

Additionally, because of the overwhelming support for Measure 1A by Californians we expect to soon begin one of Lake County’s largest capital construction projects, a destination resort, that will also make us one of, and possibly the largest employers in the County. Our little Rancheria, that has struggled and fought for its mere existence for so many years, will be the catalyst that will spark prosperity, economic self-sufficiency and self-esteem to our Pomo people and many other local residents.

It is my hope that from this “progress” we all gain strength and wisdom and that for the first time in history we might meet each other and the other members of our surrounding community in mutual respect with clean hands and straight eyes.